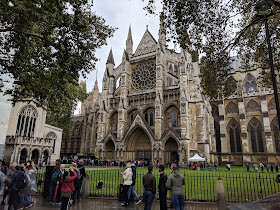 We paid a visit to the Royal Residence for last week's Sunday Snap. I asked what its name is and the answer is

Getting regal with the right answer were Sarah, Mary, Kara, Anne, Sarah and Susan.

This week we are staying in London with a church with royal connections. The site was originally chosen when a young fisherman named Aldrich claimed to have seen a vision of Saint Peter while he was on the River Thames. After this in the 10th century a Benedictine monastery was established. Edward the Confessor decided he wanted a royal burial church and it was finished just a week before his death in January 1066. It is thought that his successor Harold II (of Hastings fame) was the first king to be crowned there but certainly William the Conqueror had his coronation there later that year. It has since then become the place for coronations.

Construction of the present building was started in the 13th century by Henry III who again wanted a burial site. Over the next couple of centuries it was added to further. As part of Henry VIII's dissolution of the monasteries it was due to be destroyed but was saved. Its special status was confirmed by Elizabeth I when she designated it a 'Royal Peculiar' that is a church that directly reports to the Sovereign rather than to a diocesan bishop.

Not only is it well known for royal occasions such as coronations, funerals and weddings but also the graves and memorials to famous people. In particular Poets' Corner pays tribute to some of the country's finest writers such as William Shakespeare, Jane Austen and Charles Dickens. Last year the ashes of Stephen Hawking were interred in the nave near the graves of Sir Isaac Newton and Charles Darwin. This week's question is


What is the name of the church?

We were joined last week by Susan and some dressing up for World Book Day. Kara also had a trio of characters for World Book Day and a trip to see the Worst Witch. There was half marathon success for Sarah. Mary captured the water in motion. We had a catch up from Anne about Ash the cat. It was teenage party time for Sarah. At the ice skating gala Kelly had a proud skater. Sara spotted the drumstick flower at the flower show. Finally, Jesh has been finding out what March brings.

If you want to join in with this week's Sunday Snap then add your link to the linky below. Any theme is allowed. It doesn't have to be published today as you have until 23.55 on Friday 22nd March 2019 to join in. Grab my badge below for your blog post. Just make sure it is your photo and you hold the copyright for it. 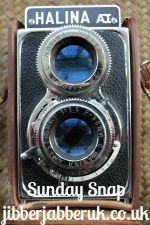