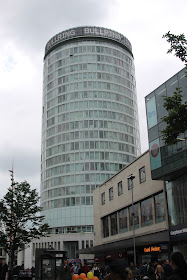 In last week's Sunday Snap we were looking at the house that was said to have inspired Charlotte Brontë's description of Mr Rochester's Thornfield Hall. I asked which book this featured in and the answer is

We had split between Brontë books but Cheryl, Nayna, Kara and Cass all got the right answer.

From the Peak District countryside we are off to the city this week. Due to its height and unusual circular design The Rotunda has become one of the best known features of this city. It was built between 1961 and 1965 as part of the city's new Bull Ring Shopping complex. The original plans had it as 12 storeys but this was revised to 25 thus making it 81m tall. The height of the building made it the perfect backdrop for advertisements to be see across the city. During the 1980s and 1990s a large sign for Coca Cola was displayed.

In 1974 the pub which occupied the bottom two floors of The Rotunda came to national prominence for all the wrong reasons. On the evening of 21 November 1974 the local newspaper received a telephone call saying that there was a bomb in The Rotunda and the tax office. What the caller failed to mention was that the bombs were in the pubs that shared these buildings. The Police started to check and clear the upper levels of The Rotunda but didn't have time to clear the Mulberry Bush pub at the bottom. 10 people were killed in this pub alone with many more seriously injured.

In 2000 it received Grade II listed building status. This is despite some critics saying it displays all the aspects of the worst type of 1960's architecture. As part of the major refurbishment of the Bull Ring Shopping Centre between 2004 and 2008 The Rotunda was also refurbished with many of the former offices being converted into residential flats and serviced apartments.

Which city is The Rotunda in?

We were joined last week by Jack and Noah enjoying the delights of September. Cheryl was wondering about living in a yellow submarine. In the mood for dancing was Susan's daughter. In San Diego Sue found some viejos. There was delight in the summer bouquet for Kelly. Kara found her daughter walking the high ropes and the swan coming in on the water.

If you want to join in with this week's Sunday Snap then add your link to the linky below. Any theme is allowed. It doesn't have to be published today as you have until 23.55 on Friday 30th September 2016 to join in. Grab my badge below for your blog post. Just make sure it is your photo and you hold the copyright for it.