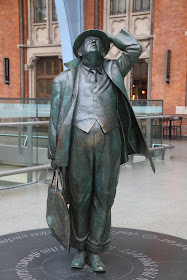 We were at the train station for last week's Sunday Snap. I asked which London railway station The Meeting Place statue was in and the answer is

Arriving on time with the right answer were Cheryl, Susan, Nadine, Kara, Susanna and Anne.

For this week we are staying in St. Pancras with a slightly more conventional statue. This one can be seen from The Meeting Place and depicts a man gazing in wonder at the magnificent roof . The reason for his homage at St. Pancras is that in the 1960s he was responsible for saving St. Pancras Station and its Chambers hotel from demolition. After the electrification of the line between 1960 and 1966 services from Manchester and Glasgow were diverted to the newly rebuilt Euston thus making St. Pancras and the hotel that fronts it seemly redundant. As a founding member of the Victorian Society and a railway enthusiast he called the plan to demolish St. Pancras as a 'criminal folly'.

He is remembered fondly as The Poet Laureate from 1972 until his death in 1984. He was recognised not only for his writing but also for his characteristic broadcasting style. Of all his many works he is probably best known for his poem 'Slough' and its first verse,

Come, friendly bombs, and fall on Slough!
It isn't fit for humans now,
There isn't grass to graze a cow.
Swarm over, Death!
This week's question is

Who is the statue of?

We were joined last week by Cheryl and the lovely Plouarzel beach in Brittany. There was dancing, football and a party for Susan's crew. Kelly found all the lines and angles in the suspension bridge. From the cruise ship Kara watched the sun setting before visiting the Colosseum in Rome. As we head into autumn in the UK Betty has been showing us the delights of her spring garden in New Zealand.

If you want to join in with this week's Sunday Snap then add your link to the linky below. Any theme is allowed. It doesn't have to be published today as you have until 23.55 on Friday 9th September 2016 to join in. Grab my badge below for your blog post. Just make sure it is your photo and you hold the copyright for it.