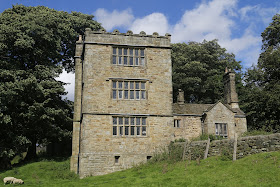 We were looking at a rather grand sanctuary knocker for last week's Sunday Snap. I asked which cathedral door it was on and the answer is

Banging on the door with the right answer were Cheryl, Louise, Jayne and Cass.

Since last weekend was Open Heritage Weekend we took advantage of some of the special events that had been arranged. One of them was the opening of North Lees Hall in the Peak District. It is thought to have been built around 1590 for William Jessop. Until last year it was leased to the Vivat Trust who rented it out as holiday accommodation. Today it is in the management of the Peak District National Park Authority. Its claim to fame lies in its literary connections. In 1845 Charlotte Brontë visited North Lees Hall two or three times when visiting her friend Ellen Nussey in nearby Hathersage. Two years later, under the pen name of Currer Bell, Charlotte's most famous book was published. In the book the eponymous heroine visits the home of Mr Rochester. It thought that the Thornfield Hall in the book was inspired by Charlotte's visit to North Lees Hall. Thorn is an anagram of north and 'field' comes from the Anglo-Saxon word 'leah' or 'lee' meaning woodland glade or field. The description of Thornfield Hall matches that of North Lees Hall,

“It was three storeys high, of proportions not vast, though considerable: a gentleman’s manor-house, not a nobleman’s seat: battlements round the top gave it a picturesque look. Its grey front stood out well from the background of a rookery, whose cawing tenants were now on the wing: they flew over the lawn and grounds to alight in a great meadow, from which these were separated by a sunk fence, and where an array of mighty old thorn trees, strong, knotty, and broad as oaks, at once explained the etymology of the mansion’s designation.”

To further the claim a family with the same surname as the title character lived at North Lees during the 15th century and again from 1750 to 1882. One of the key stories in the book is that of Mr Rochester's mad wife who was locked in the attic and later died in a fire. This is the same fate that actually happened to Anges Ashhurst who lived there in the 15th century. This week's question is

What is the name of the book that features Mr Rochester and Thornfield Hall?

We were joined last week by Cheryl and her king of the world son. Anne and family were making the most of a power cut. There was dancing and park fun for Susan's crew. Sue has been treating us to the beauty of orchids. There was a soggy walk to school for Emma's son. Kelly found that the writing was on the skin. There was blue skies all the way for Betty's trip across New Zealand. Kara's son was enjoying his swimming lesson and left the Thai boxing to the professionals.

If you want to join in with this week's Sunday Snap then add your link to the linky below. Any theme is allowed. It doesn't have to be published today as you have until 23.55 on Friday 23rd September 2016 to join in. Grab my badge below for your blog post. Just make sure it is your photo and you hold the copyright for it.