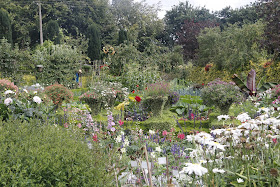 Our latest garden find through the National Gardens Scheme (NGS) is the Meynell Langley Trials Garden. What caught our eye was the unusual nature of this garden's set up. It has been designed over the last 20 years as a trials gardens where new and old varieties are tested.

Originally this was set out as the fruit and vegetable garden for the family's own personal needs but they became to realise that there's only so much one family could eat by themselves. Instead they decided to turn the plot into an area for the testing of plants to sell in the onsite nursery. 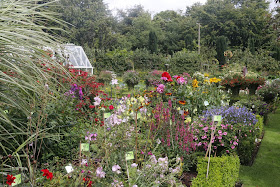 All around the garden you can find poles with numbers attached to them. Each of the numbers correspond to a plant by it. So I can tell you that 134 in the bottom corner is Dahlia Bishop of Llandaff as they have a printed a sheet for each visitor to take round the garden with them. 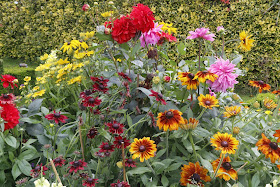 As a trials garden everything is left in place despite its condition. Visitors are warned this is not a show garden but I think anybody would be proud of such a display. A mild winter has meant different things for different plants. So the bedding plants enjoyed the weather but the damp, warm conditions did not favour the delphiniums and echinancea which prefer colder, drier winters. 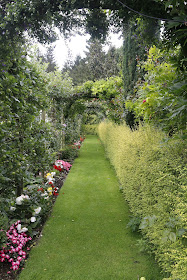 Everywhere you look there is some sort of colour or greenery. At one point the paths between the veg beds were bare earth but the constant hoeing and weeding persuaded the owner to lay grass instead – after steam sterilising the earth! Now all the paths are matching even if they still need a lot of mowing. 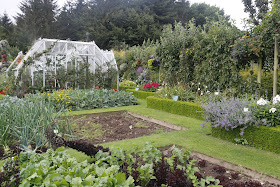 Having an allotment for the first time this year means we are always on the lookout for new ideas and some tips to do things better ourselves. The veg plot here has made up our minds that it is OK to put plants closer together. 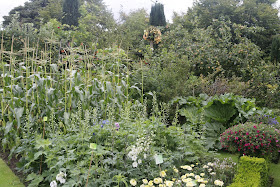 We tried sweetcorn at the allotment this year but after it germinated it fried in the heat of the greenhouse. We're determined to try again especially after seeing this little block of sweetcorn in the garden. 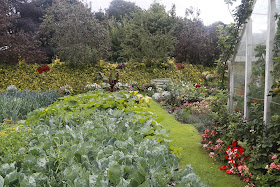 The whole garden is protected from the strong winds by the surrounding trees. While we were there we could see and hear the wind rustling through the trees but the garden was perfectly sheltered. 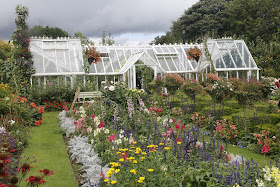 Of course even sheltered spots need a greenhouse. The owner found back in 2000 that he had plenty of glass lying around the nursery. He decided to put the glass and his woodwork skills to good use by building his own Victorian style greenhouse. 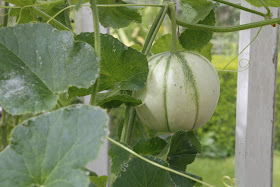 From the greenhouse not only tricky fruits such as melons are grown but also most of the garden's automatic irrigation system is controlled. 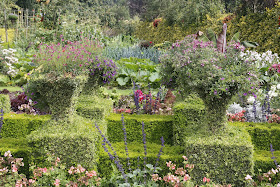 Why have pots for plants when you can plant pots? 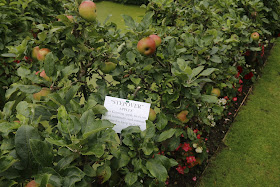 Whatever you do find an excuse to get to Derbyshire sometime to find this gem. It really is off the beaten track but well worth the trip. As well as the Trials Garden there is also the nursery itself and and lovely café. Meynell Langley Trials Garden will be open again for the National Gardens Scheme on Sunday 18th September and Sunday 16th October 2016 with apple tasting.
Jibberjabberuk at 01:00