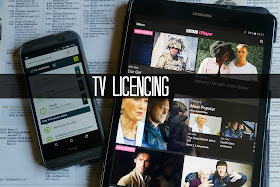 Welcome to this week's Finance Fridays. Last week we were talking about savings options. This week we are looking into some of the changes that have been introduced recently to TV Licencing. Since the 1st September 2016 you will need to buy a TV Licence if you watch any form of live television or anything on the BBC iPlayer. Previously catch-up content on the iPlayer was excluded but now it is part of it. Let's have a look at the full details.

How much is it? - A standard colour TV Licence is £145.50 for one year. If you only have a black and white television in the house then the TV Licence is just £49. You can pay in one go or spread the payments out in quarterly, monthly and fortnightly payments but these do attract a premium payment. There are a number of ways of which the simplest is by direct debit. If you make sure you always have the money in your account then your TV Licence will always be valid and it will never run out. Another way to pay is by requesting a TV Licencing payment card but you will be responsible for ensuring each payment is made. You can do this online, by text or phone or by going to shops such as Post Offices, newsagents and small grocery stores which have a PayPoint.

What TV services are excluded? - If you don't watch or record any live TV or use the iPlayer you may not need a TV Licence. Many people have now ditched these services in favour of watching ITV, Channel 4, Channel 5 and the UKTV channels such as Dave, Drama and Yesterday through their catch-up services. So if you are willing to wait an hour or two for your Coronation Street fix you don't need a licence to watch it via the ITV Hub.

You will also be able to do without a TV Licence if you watch television solely through paid services such as Amazon Prime and Netflix where the content is classed as 'on-demand'. If watching YouTube for cat videos or box openings is you thing then you can still do this for free.

Discounts and exemptions – Once you reach 75 you no longer need to pay for a TV Licence. Remember a TV Licence covers an address so you can transfer the name of the licence holder to someone who permanently lives with you who is 75 or over. You will need to contact TV Licencing to register so don't just stop making the payments.

You could qualify for a 50% concession if someone in the house is classed as 'severely sight impaired. However this is quite strict and does not apply to anyone classed as partially sighted or sight-impaired. You will need to provide evidence of your sight impairment.

What if I should have a TV Licence but I don't pay? - TV Licencing don't mess about with non-payers. If you are found to be watching TV without a valid TV Licence when you should have one then you can be liable for a court appearance, prosecution and a fine of up to £1,000.

Do you watch much television via live services or the iPlayer? How you thought about ditching your TV Licence?

If you want to join in with this week's Finance Fridays then add your link to the linky below. Any post concerning financial matters is allowed. Full details here. It doesn't have to be published today as you have until 23.55 on Tuesday 13th September 2016 to join in.