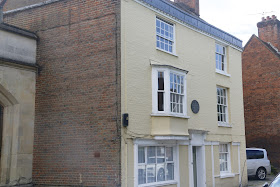 We were in Winchester looking at a statue of one of the greatest ever Britons for last week's Sunday Snap. I asked who the King of Wessex was and the answer is

King Alfred or Alfred the Great

We are staying in Winchester for this week's Sunday Snap. This week saw the 199th anniversary of the death of one of Britain's most famous female authors. It was in this house next to Winchester College that she died on 18th July 1817. I've had to take the photograph at this angle as the grey plaque has her name on! Through her family's clerical connections her brother was able to arrange for her to be buried in the nearby Winchester Cathedral. The memorial gravestone makes no mention of her work as a writer. In her lifetime she only published four novels with the other two completed books published as a set a year after her death. She did also write a number of short stories and a couple of uncompleted novels.

Despite her novels being known for her critique on love, marriage and relationships she never found true love herself. It seems she accepted one proposal of marriage but after thinking it through she called off the engagement.

“The more I know of the world, the more I am convinced that I shall never see a man whom I can really love. I require so much!”

She was born in Hampshire but moved with her family to Bath when her father retired from his ministry. Despite being associated with Bath it seems she never wrote any of her major novels whilst living in the city. After her father died in 1805 the family left Bath and returned to Hampshire. By 1816 her health was in serious decline and upon the advice of her doctor she moved in this house in Winchester with her sister Cassandra where she spent her final weeks. Despite the plaque on the house it is a private home and is not open to the public. This week's question is

Which author died in this house?

We were joined last week by Susan who has been dodging the rain. Cheryl has been on the road to somewhere and enjoying doggy snuggles. In Croatia Emma has been seeing the laundry in black and white. Making the most of summer is Emma who has been picking daisies. Jo and family have been making use of their local library. Capturing all the facets of a crystal was Kelly. In New Zealand Betty has been experiencing a mild spring. Kara's kids have been enjoying the water at both the beach and in the swimming pool.

If you want to join in with this week's Sunday Snap then add your link to the linky below. Any theme is allowed. It doesn't have to be published today as you have until 23.55 on Friday 29th July 2016 to join in. Grab my badge below for your blog post. Just make sure it is your photo and you hold the copyright for it.