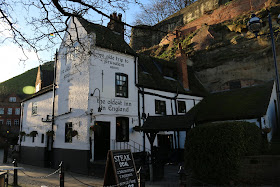 We were off for last week's Sunday Snap to have a look at a castle built on top of some rocky caves. I asked which city it was in and the answer was

Getting the right answer was Cheryl, Susan, Kizzy and Claire.

For this week's Sunday Snap not only are we staying in Nottingham but right next door to the rocks at the bottom of Nottingham Castle. This pub is the Ye Olde Trip to Jerusalem. It purports to be the oldest inn in England although some claim it isn't even the oldest pub in Nottingham! The pub is built into the side of the rocky caves and it is the age of these caves that gives rise to the owners dating back it to the 12th century. It is thought is may have been used as a brewhouse for the Castle above. The first recording of it being used as licensed premises was as pub in the 18th century called The Pilgrim. In 1799 it changed its name to Ye Olde Trip to Jerusalem. The 'trip' is an old term for a stop on a journey. The official date that the pub claims to date from is 1189. This is the year when the English king at the time and Pope Gregory VIII called for a Third Crusade to the Holy Land. In Nottinghamshire folklore Robin Hood was said to have been driven to outlawry while this king was away fighting in the Third Crusade and his brother John was left to rule.

Which 12th century king was associated with The Crusades to the Holy Land?

We were joined last week by Snoskred and some visits to the beach in differing weather. Sophie has been up early to capture the colourful morning sunrise. Finishing the family walk at the lighthouse was Cheryl. Enjoying the fun of some Shrove Tuesday pancake tossing was Susan's trio. Kelly was getting to the Sharpie end of organising her pens. Getting potty with some ceramics was Sue. Finally, Kara had found herself another castle built on a rock.

If you want to join in with this week's Sunday Snap then add your link to the linky below. Any theme is allowed. It doesn't have to be published today as you have until 23.55 on Friday 26th February 2016 to join in. Grab my badge below for your blog post. Just make sure it is your photo and you hold the copyright for it.

I'll share my favourites with you next week and remember I do like a bit of a tale to go with a photo but it's not a necessity!