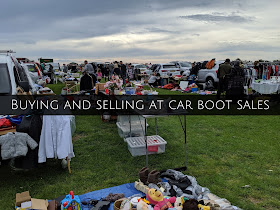 We were looking at the new rules for renters in last week's Finance Fridays. This week we are looking at tips for selling at car boot sales and how to grab a bargain at one.


Check the weather – Most car boot sales are on grass pitches so even if the weather is forecast to be good then it may be called off if the ground is still too wet from rain in the previous days. Many car boot sale organisers have Facebook pages or websites where they will post updates either the night before or very early in the morning. If the forecast is rain on the day of the car boot sale then don't bother packing your car up. It probably won't be on and if it is then not many buyers will turn up.


Take your own food and drink – There always seems to be a catering stall at car boot sales. The smell of the bacon sandwiches may be enticing but you will be throwing away any profits you make. Take a flask and some cereal bars to keep you going.


Wrap up warm – Car boot sales are held on large and often very open pitches. One I go to regularly is on a field quite high up. No matter what the time of year it is always cold and windy up there.


Set up early – Most car boot sales now give sellers a chance to set up before buyers are allowed in. This lets you get your items all sorted without being hassled by over keen buyers. If you arrive after the buyers have been let in then you will find buyers swarming round your car and it can be very stressful. You also want to be there in time for all of the potential buyers to have a chance to buy your goods.


Check the finish time – Once you've parked up on your pitch it can be difficult to get out if you think you've made enough money for the day. One car boot sale I go to opens for buyers at 6.30am but doesn't let sellers out until 11.30am. This because they charge a fee to buyers to get in and they were getting complaints that there weren't many cars left when they turned up.


Lay your goods out – When buyers have a lot of sellers to go round they haven't got time to be rummaging around in boxes. Bring a tarpaulin, ground sheet or at least an old blanket or duvet cover to provide extra space on the ground. Lay out goods so buyers can see them easily when they walk past. If you are selling clothes bring a clothes rail or see if you can borrow one.


Price it right – By taking the time to put price stickers on your items you will save a lot of time wasters while encouraging genuine buyers. Buyers love bargain boxes where everything is one price. If you haven't put a price sticker on then be clear what you want to charge for something. Do be prepared for offers but it is up to you whether you take that offer. Don't ask the buyer what they want to pay for it. Someone did this to me the other week when I asked the price of a book. I could tell she was wanting to play games so I just walked away.


Do remember what you are selling you want to get rid of. Just because you paid £40 for a pair of shoes and only wore them once doesn't mean you will get anything like that back at a car boot sale. You'll be better off trying to sell them online. There will be stacks of books, CDs, DVDs, toys and clothing for the buyers to choose from so if there is nothing remarkable about your items you won't be able to charge too high a price for them. There's no point in overpricing everything only to have to take it home again without making your pitch fee. You will probably make more money by pricing items lower and selling more than by pricing higher and only selling a few or no items.


Bring a float – Don't expect people to be carrying the right change with them. You'll need a selection of £1, 50p 20p an 10ps. I wouldn't price anything with a 5p in it as it starts to get too fiddly all round. Do be aware of people trying to pass forged notes to you. If you're not happy with whatever money they try to give then refuse it. You are not obliged to accept their money or sell the item to them if you don't want to.


Keep an eye on buyers – Sadly there will always be people wanting to steal from you. Some will work in pairs while others will take advantage of any crowds forming around your stall. It's a good idea to have any least two if not three people on your stall to watch out for such behaviour.


Do I need to declare any money I make? - If you're just selling your unwanted items from around your house then no. If you are buying goods with the specific intention of selling them on for a profit then you are now a business and you need to inform HMRC. You can make up to £1,000 a year without needing to complete a full self-assessment form or it being taxable but you still need to confirm this to HMRC.


Choose your time – If you arrive when the buyers are first let in you may find that not all the stalls have been set up yet or even arrived. If there is an admission fee then early buyers may have to pay more as well. However, if you are after collectables or hoping to grab a bargain on something valuable then getting there early will give you a better chance of doing so.


If you're not an early bird then arriving later can have its benefits. If a seller has a lot of stuff left then they won't be keen on having to pack it all up and take it home again. They may start offering rock bottom prices or even give items away.


Don't show too much knowledge – If you know something is worth quite a bit of money but it isn't priced up then don't be too keen about it. If the seller doesn't know its worth they may get wind of it if you tell them too much about it.


Don't get pushy – Giving the seller an offer on an item is acceptable but if they don't want to accept it don't get aggressive. You won't get anywhere with the seller as they are more likely be happier to take it home with them rather than sell it to you.


Hooky goods – Car boot sales are usually held early on Sunday mornings. This means that items stolen the night before can be flogged quickly a couple of hours later. Look out for high value items such as bikes, power tools, laptops, tablets, gaming systems and mobile phones. Smaller items such as hand tools like spanners and screwdrivers are often stolen from garden sheds while sunglasses and satnavs are taken from cars.

You might also see counterfeit goods at car boot sales. Rather than been laid out and sold as new it could be a few bags sold as second hand goods. Remember if someone wants to make decent money out of selling their Louis Vuitton handbag they will do so online and not at a car boot sale.


If you are thinking about buying electrical goods from car boot sales do remember that the item may not work or even be dangerous. Many people end up putting broken items in their garage rather than throwing them out straight away. This means they could have forgotten that it was broken.


With everything you buy from a car boot sale there are no comebacks or refunds. If you do buy stolen goods even without knowing and the police track you down they are entitled to take the goods off you without compensation.

Take time if you can – With so many pitches to get round it can be easy to whizz round without looking properly. Most bargains can be found buried in boxes that other people have walked past.


Bring you own bags – Don't expect stallholders to give you carrier bags. They cost money now to buy so bring your own.


Take plenty of change – Car boot sellers are not shops and while they should bring a basic float with them they won't have masses of change. Also don't bring high value notes as they may be refused if they don't have the change or are wary of taking them. You wouldn't want to miss out on a bargain because you didn't bring the right money with you.


Have you ever sold at a car boot sale? What are you tips for buying? 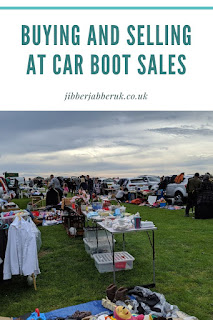