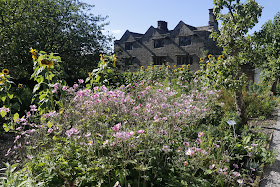 The popularity of Eyam to visitors is not only as a pretty Peak District village but also for a far darker reason. In 1665 a journeyman tailor, George Vicars, received some cloth from London. His landlady hung it out to air but before this a rat flea was able to jump off the fabric and bite Vicars. Within a week he was dead from the bubonic plague. The infection spread quickly through the neighbouring houses and before long the villagers were thinking of escaping to Sheffield for safety. The local rector, Rev. William Mompesson, persuaded them to stay in the village. By quarantining themselves they stopped the plague from spreading any further thus saving many lives. Out of a population of around 350 only 83 villagers survived the 14 month outbreak. Mompesson was one who survived the plague but it claimed the life of his wife, Catherine. Despite isolating the village Mompesson sent his own children away to Sheffield just before the quarantine was put in place. 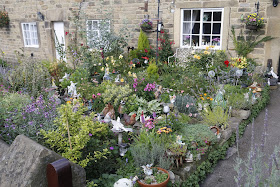 The house where George Vicars lived is still standing today and certainly looking a great deal more inviting than it would have been 350 years ago. 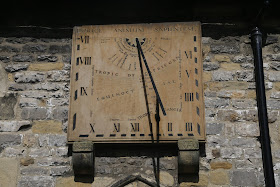 Whilst the parish church is seen as the centre of the village – don't miss the 8th century Celtic cross or the unique sundial dated 1775 – round the corner is the rather fine Jacobean style manor house Eyam Hall. 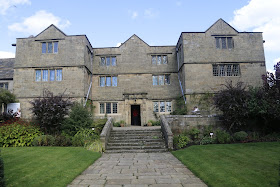 I remember taking my brother to Eyam many years which was entirely based on its reputation as the 'plague village'. The courtyard to the Hall looked familiar with its selection of craft shops and I think we did pay to go into the Hall but I don't remember anything about it or its gardens. I think when we went you entered the Hall by going through the front gates and straight into the Hall but now entry is via the courtyard. 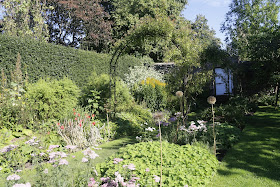 When we went before Eyam Hall was a private house owned by the Wright family. It has been in the family for centuries.The house was originally built just six years after the plague had virtually wiped out Eyam. No doubt land in the village was cheap and freely available still. In 1990 it was inherited by Robert Wright and his wife Nicola. After scanning down the family tree I worked out Robert was the fifth cousin once removed of the previous Wright family owner. The pair of them probably wasn't expecting to take on such property but within two months of moving in they realised that in order to make the house financially viable they would need to open it to the public. 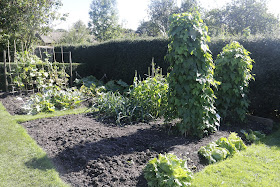 For 23 years the couple and their family lived in the house while still allowing visitors to walk around the house and get married in it. In 2013 they decided to retire but still needed to make money from the house. Since they didn't want to sell they agreed with the National Trust that they could lease it and run it in a similar fashion to their other historic properties. It was the first time the National Trust has leased a property from its owners. The National Trust make it very clear that although they run it on a day-to-day basis if the roof falls in it is the financial responsibility of the Wright family to sort it out! 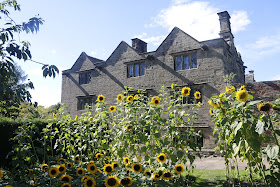 Out in the walled garden the area is split into two sections. The top garden takes in the sun and this is reflected in the amazing selection of sunflowers that has been grown this year. 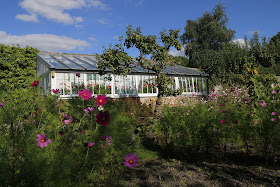 Also making the most of its positioning is the greenhouse. At the moment it is filled with geraniums. You may have also noticed the apple trees. There are several around the garden all of which look very old. They look as if they have been espailer trained but the ones along this border have no walls or wires to be trained along. 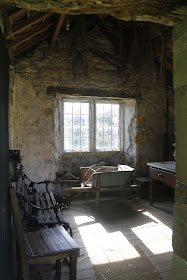 In the bottom section of the walled garden is the original banqueting house. It has long been abandoned as an entertaining area and is now used as a gardener's shed. 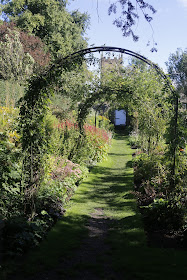 There's also a very pretty arched walkway leading up to a private door. In the background is Eyam Church. Many estates years ago had their own chapel but the closeness of the church means this wasn't necessary. 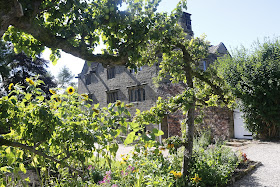 If you come to Eyam expecting just tales of plague and death think again and make sure you pay a visit to Eyam Hall.
Jibberjabberuk at 01:00